The technology exists for the world to transition

We are proud to announce our partnership with @omr

Guess who paid us a visit in The Sustainable City?

A new addition to The Sustainable City is being re

What makes the UAE a great place? Tune in tomorro

Tonight was filled with art & music in the opening

We were honored to welcome the Jordanian Minister

New destinations on the horizon! Have you been to

Every morning is a beautiful morning with this vie

At Diamond Developers, we’re committed to a net

Our weekend was busy with many spooky activities,

Having everything at close proximity doesn’t onl 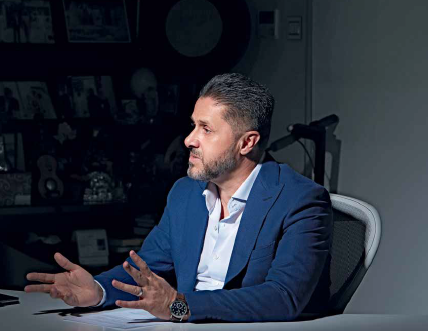 Faris Saeed, CEO of Diamond Developers on why he built The Sustainable City

Diamond Developers, like many companies of its type, enjoyed high-profile successes at the peak of Dubai’s real estate boom.

It was one of the first companies in Dubai to enter the freehold property and real estate development industry when the emirate introduced freehold property ownership in 2002, and completed numerous residential and commercial projects including six towers in Dubai Marina and more than 150 homes in Jumeirah Village Circle.

The financial crisis hit the real estate sector in the region hard, but while others crumbled and dissolved as prices tanked, Diamond’s owners found themselves questioning the very ethics of the industry that they had inhabited so successfully.

Unafraid of initiating a dynamic change in direction when the economic climate dictated it, the company behind The Sustainable City in Dubai, previously a traditional developer, enacted a complete about-face, refocusing its operation squarely on sustainability. At the core of its new vision: an entirely new kind of neighbourhood, created in such a way as to be entirely sustainable and achieve net zero carbon emissions.

A much bandied-about buzzword used to enhance the green credentials of anything from your company’s annual low electricity day in an otherwise carbon-spewing office to swapping single-use plastic items for the negligibly better paper version, sustainability has found its ultimate and true expression here. Social, environmental and economic issues have all been painstakingly woven into the master plan and today, Diamond Developers’ flagship project is a globally recognised exemplar of successful, sustainable real estate development.

It’s caught the attention of some of Hollywood’s leading environmental activists including Leonardo Dicaprio (who visited in 2017) and Akon, who toured the neighbourhood in March of this year. Aside from that, it’s received the seal of approval from the United Arab Emirates’ ruling family and piqued serious interest from countries in the Middle East, Africa and Europe eager to recreate this ground-breaking blueprint for sustainable and happy living on their own soil. After all, if it can be done in the desert, it can be done anywhere.

“The 2008 crisis was so strong that not many business models could survive it, so we started to think how we could create a model for sustainable real estate,” says Faris Saeed,  CEO of Diamond Developers, founder of The Sustainable City and Arabian Business’ 100 Smartest People 2017 winner.

“My partner Wassim Adlouni and I studied the definition of sustainability, seeing what the rest of the world was doing. We managed to understand it in a comprehensive way. Each community we visited focused on one thing – energy, or waste, or farming… most didn’t innovate in the social part, or study the commercially sustainable aspect enough. To make a project sustainable you have to combine the three elements – environment, society and economics – together.”

Its first phase covers five million square feet and comprises more than 500 villas, grouped into five residential clusters and connected to an urban farm and park that runs along the entire length of the development, forming the community’s ‘Green Spine’, within which there are 11 biodome greenhouses.

Features available to its 3,000 residents include an electricity-generating gym, equestrian club, mixed-used plaza, Fairgreen International School and several clinics. Residents have access to a park, and with cars parked nearby beyond residential zones, children are able to run with the kind of free-range freedom that seems to almost belong to a bygone era.

Awarded ‘Happiest Community’ for the third year running, the community also comprehensively responds to the environmental aspirations of the Paris Agreement (2050), the United Nations Agenda for Sustainable Development (2030), the Dubai Clean Energy Strategy (2050), and the UAE Vision (2021). The development has proven to be so successful on the many goals upon which it staked its reputation – low emissions, a socially rounded community, sustainable living, no service fees, all topped with a bottom line that most developers would envy – that it has become a flagship for similar projects around the world.

And that’s thanks not just to an ambitious vision, but an exceptionally well researched one.

Saeed and Adlouni spent four years travelling around the world, meeting with preeminent practitioners of sustainable living, leaders in various fields under this umbrella that has become something of a buzzword. Saeed, a trained civil engineer and Adlouni, an architect responsible for Diamond’s six towers in Dubai Marina and numerous large-scale commercial projects, commissioned meaningful, unhurried, in-depth research from leading academic institutions, sustainable communities, determined to bring a wide body of knowledge into every aspect of sustainable living.  They visited a community in California, that was being built as a ‘net zero energy development’ and became convinced it was possible to create something similar in Dubai.

“We looked at food, energy, water, products or building materials, mobility, and waste. We saw in these elements all the types of emissions and absorptions and the impact on air quality and climate change. We spent several years studying this and building it into the commercial part. We knew if it was too expensive it would defeat the purpose, because people won’t pay a premium for sustainability, unfortunately. So it had to be equivalent to ‘business as usual’.”

To achieve this, Diamond Developers’ founders complemented their 25-years plus experience in real estate by drawing on some of the brightest young minds in engineering. True experts in sustainable real estate are still very rare, says Saeed, because it is a relatively new field, so this innovative approached harnessed outside-the-box thinking and matched it with heavyweight experience – a winning combination. The master plan was crafted in-house over a period of several months, and comprised a 12-chapter strategy that included a roadmap for managing the completed project.

The location for the project came about after another project in the Lagoons stalled due to the financial crisis. The company agreed to swap it for a 5 million sq ft swathe in Dubailand. With the land along an empty stretch of Al Qudra Road acquired, it was time to break ground and construction on the $354m project started in 2013. During construction, The Sustainable City used precast wall panels to reduce construction waste, incorporate recycled materials such as crumb rubber and focused on durable, high-quality materials with an extended lifecycle.

The first residents moved in at the end of 2016.

Today, villas in the development are categorised as nearly Net Zero Energy; using rooftop solar power, the villas offset up to 40 percent of their electricity consumption. So far, The Sustainable City has deployed 6.98MWp of solar PV panels and is also pioneering the use of B100 biodiesel, solar thin film technology and energy storage solutions.

“Once the city is completed, we will achieve 100 net zero energy in the Autism Centre, community areas, community mall, and 50 percent net zero in the villas. We save 40 to 50 percent of consumption just through the way we have designed things, from insulation to LED lights, orientation. Today our electricity bills are a quarter less than a similarly sized development. Our residents are saving a minimum of around AED20,000 per year on their bills, which makes them very happy.”

Speaking of happiness, the residents have become the area’s greatest ambassadors. Today, The Sustainable City enjoys around 95 percent occupancy, significantly more than the developments that neighbour it. Social media comments and reviews are unanimously positive, something almost unheard of in an industry that doesn’t always deliver on the stunning rendered images and promises of superlative living experience.

The Sustainable City seems to have pleased everyone who lives there – many residents are there not because they saw expensive advertising hoardings (there were never any) but through word of mouth from those who had already moved in and endorsed it from personal experience. Another resounding endorsement is that Saeed and Adlouni both live in the development with their families and form part of the community that they have built.

“People came here primarily for the savings in community fees and service fees, but in no time they adopted the lifestyle of sustainability. Everything here is sustainable: we have sorting at source in the kitchen, and on the doorstep. We have made it easy to practice. Residents feel they are giving to the community and to nature, and to their children eventually, because we have a responsibility to safeguard the planet for them, so they feel happy and guilt-free. When you are in a community like this, you feel it, and you deliver the message to others,” said Saeed.

Around the corner is an even larger development, based on The Sustainable City, in Sharjah. Saeed is adamant that all projects moving forward will be built according to this philosophy.

Only one frustration, it seems, continues to linger, which is that more developers have not opened their minds to the commercial viability of sustainable planning.

“We don’t see developers as competitors and we want them to learn from what we have done. People resist change and don’t want to take a risk, but we have shown that it isn’t a risk. The cost of build is the same and operational costs are much lower. We are building cities all over the world, but somehow people are still hesitant in this region. I don’t know what’s wrong; I can’t see a reason why everyone isn’t doing this, because it isn’t an option any more, it is a necessity. The city is open to everyone to visit and we offer our help to everyone.”